Home > Our research and academic activities > Our international academic exchange

Based on the philosophy that “the combination and sublation of Chinese medicine and Western medicine enables us to understand life as a whole, and further brings enormous contributions towards healthier lives,” our company has been engaged in an academic exchange with the Peking University Hospital (PUH) in China, which plays a leading role in the integration of Chinese medicine and Western medicine. Moreover, we have been sincerely accumulating and building clinical evidence at leading medical institutions which engage in cutting-edge studies. 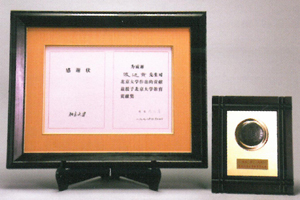 In 1998, a ceremony of presenting the Peking University (PKU) Contribution to Education Award was held at the school, and PKU Vice President Ma Shufu conferred gratitude and a plaque to CEO Watanabe. This award is a testament to the deep appreciation of WOL's friendship and contribution to education at PKU. 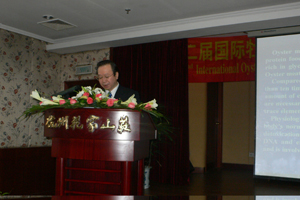 Our company and the Peking University Hospital (PUH) have been engaged in joint research since 1991, and have published six jointly written academic papers. These academic exchange activities are evaluated by the PUH, which was why CEO Watanabe was invited to take the positions of Academic Advisor (research on oysters) of PUH in December 2000, and Academic Advisor in Preventive Medicine in August 2006. 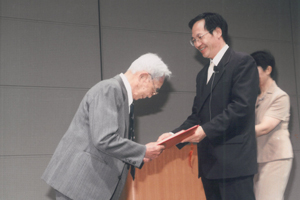 In July 2004, during a special lecture on Watanabe Oysters for delegates of the Peking University Hospital (PUH) visiting Japan, PUH awarded the Health Honor Award to Chairman Tomio Watanabe.

The citation reads: “The University praises the merits of Dr. Watanabe, who succeeded in developing oyster meat essence tablets for the first time in Japan and contributed to people’s health.” PUH President Zhang Hongyin expressed his gratitude and presented a certificate to Chairman Tomio Watanabe for over 60 years of research on oysters, and WOL's long-term exchange with the PUH.

Academic Exchange Meeting on Preventive Medicine in Japan and China 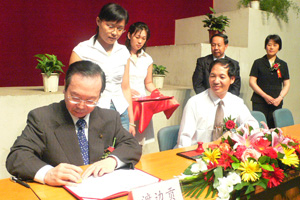 In August 2010, at the newly completed Peking University Hospital (PUH), we held the 2nd China-Japan Preventive Medicine Academic Exchange Conference with the participation of MD Zhang Hong-yin, President of the PUH, and MD Wang Hui-fang, former President of the PUH. At this social gathering, we invited President Zhang to assume the post of WOL Academic Advisor, and both parties pledged further development of academic interaction in the future. To express our gratitude we presented the letter of appreciation to former President Wang for his long-term efforts contributing to our company.

In addition, to celebrate the completion of the new building of the PUH, the company presented and planted 15 cherry trees as a testimonial of long-term friendship with our company, and to show our gratitude, and held the unveiling ceremony of a monument for the cherry tree planting on the same day, which PUH reciprocated with a monument to WOL. The inscription of testimonial of eternal friendship with our company is handwritten by President Zhang. 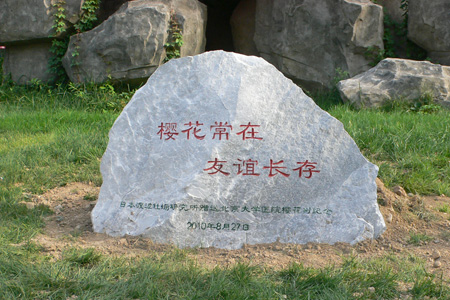 “Our friendship is eternal, like cherry blossoms”
In commemoration of the cherry tree planting, presented to the Peking University Hospital from the Watanabe Oyster Laboratory of Japan.
August 27, 2010 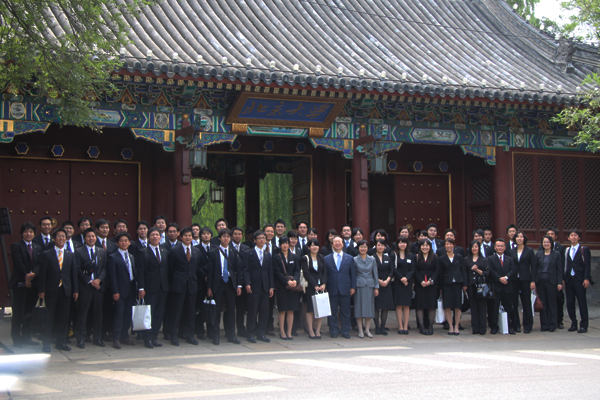 At the West Gate of Peking University (August, 2010)

In September 2011, WOL held an academic exchange conference at Peking University Hospital auditorium. Among those who participated in the conference were PUH doctors and nurses, Atsushi Takeda of the University of Shizuoka School of Pharmaceutical Sciences, Japanese pharmacists, as well as WOL researchers. Among the papers that were presented were those on essential trace metals and cerebral function, antioxidant capabilities of a novel antioxidant found in oyster meat essence, and the effect of Watanabe oysters on bone resorption action for menopausal women and as a fertility treatment.

In October 2013, WOL took part in the 2013 Marine and Natural Products for Health Science symposium held at the College of Animal Science of China’s Zhejiang University. All employees of WOL participated in the symposium as part of its employee-training program.

CEO Misugu Watanabe delivered the keynote lecture on the isolated novel antioxidant extracted from oysters, while two other WOL representatives made presentations.

Our laboratory and equipment

Our laboratories and specific equipment.

Research institutes with which our company conducts joint academic research.

Publication of research results of our laboratory.

Academic papers published by our laboratory.

Our company has been engaged in an academic exchange with PUH in China.

We actively hold lecture meetings for pharmacies and drugstores.